Before arriving in Vancouver I had a good idea of what I wanted to do and see. So this post is all about what I’ve already done. With the Bunac Work Canada programme I received a Lonely Planet guide for Canada, not just for Vancouver. I love the Lonely Planet guides, I used the Berlin one back in November 2015 and it was my bible for the entire trip. They include everything from sightseeing to shopping to food and drink, what more could a girl want?!

Commercial Drive was one of the first areas I explored. It was home to our first airbnb place situated in the Grandview-Woodland neighbourhood, about 20 minutes on a bus to Downtown Vancouver. It was formerly known as Little Italy so the first meal I had was pizza, my favourite. It is also filled with quirky little coffee shops, organic whole food supermarkets and hippies. I am frantically trying to find some pictures to attach below but I have none of “The Drive” (must take more photos). The only photo I have is food related, donuts from The Dime. I would recommend this place for food, it’s super cheap as everything on the menu is under $5 and also really tasty.

Downtown Vancouver is definitely my favourite place to be, in the middle of all the action. It has tonnes of skyscrapers which reminds me of New York, I feel so cosmopolitan strolling through the city. I saw a lot of Downtown in the first week, walking miles and stopping for refreshments (beer). It is home to the SWAP office which is handy if I need to print anything off or ask any silly questions. Granville and Robson Street are located in Downtown; filled with restaurants, bars, shops and many Starbucks. I wish I drank proper coffee so I could stroll with a takeout coffee in my hand, I don’t think a decaf latte counts. It is a very multicultural place and lots of tourists. I guess I’m still a tourist and I definitely do not know my way round even though I’m in Downtown most days.

James and I stumbled upon David Lam Park, it’s strange how one minute you are walking through streets of high-rise buildings then a park appears and you can see False Creek. False Creek separates Downtown from the rest of the city as you can see below. David Lam Park and False Creek are so calm and relaxed compared to Downtown, even though it is just minutes away. It is super photogenic too with the water, boats and the skyscrapers in the background. A jazz festival was in full swing at the park, it was a great atmosphere and really sunny. Again I wish I took more pictures, I promise I’m on it next time I am out and about. 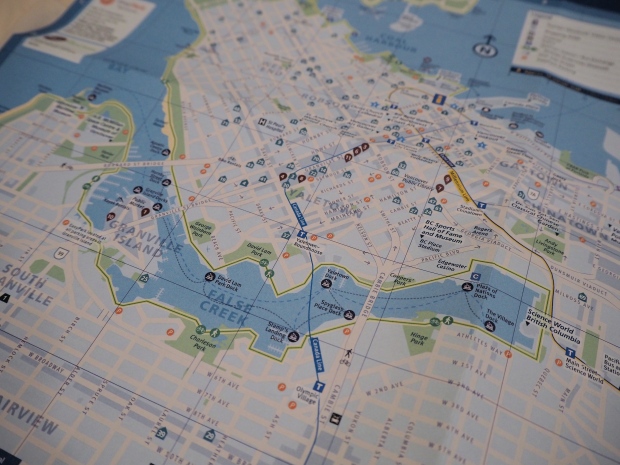 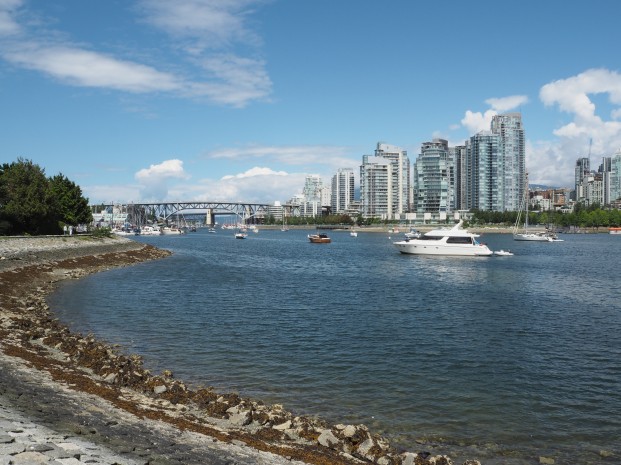 I love that Vancouver is a city but also has beaches. I have visited two so far, Jericho and Sunset Beach. Sunset Beach is located in West End, very close to Downtown. It didn’t look like much when I saw it as it was cloudy and empty apart from dog walkers and fitness freaks. It doesn’t have white sand and palm trees but it is better than Hessle Foreshore back at home. It looks out onto Burrard Street Bridge, not too shabby eh?

Jericho Beach was a lot nicer, again it was cloudy and grey. I thought I was escaping British weather, clearly not in Vancouver. It is in the Kitsilano neighbourhood and has a sailing club and park. It is also home to various water sports like kayaking and paddle boarding. I would like to return on a sunny day. To top it off it had amazing views of Downtown and West Vancouver. 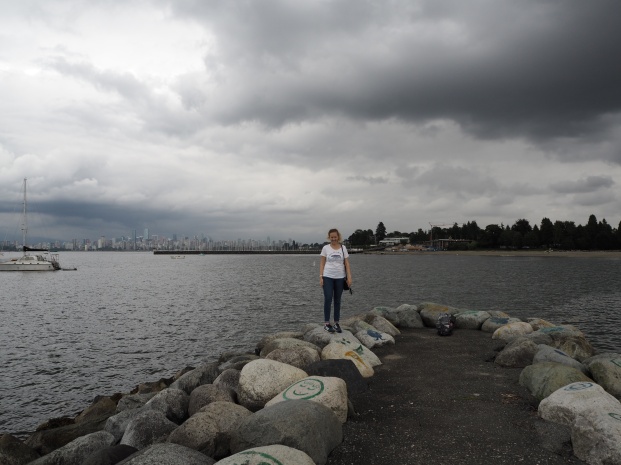 I have mentioned Canada Place in my Canada Day post so I won’t say anything about it, I’ll just show you some more photos… 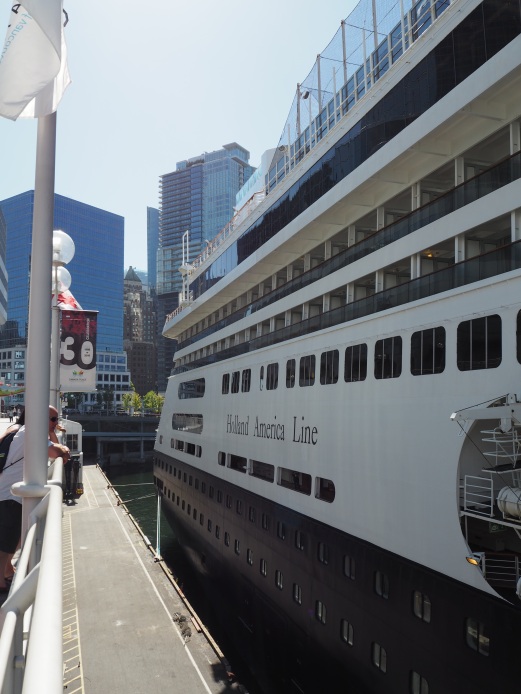 Finally the other day I went to McArthurGlen Designer Outlet just for a churro ice cream sandwich and it really did not disappoint. Daily Hive is a website and Instagram account I love scrolling through. It is all things Canada; news, food, events and things to do in your chosen city. So when I saw an article about a churro ice cream sandwich I couldn’t ignore. Obviously a spot of shopping gave the trip even more purpose too. It is based in Richmond near the airport which you were reminded of constantly with low flying airplanes every ten minutes or so. I took a train and a bus (I miss my car) but it was worth it. It was really nice sunny day too. 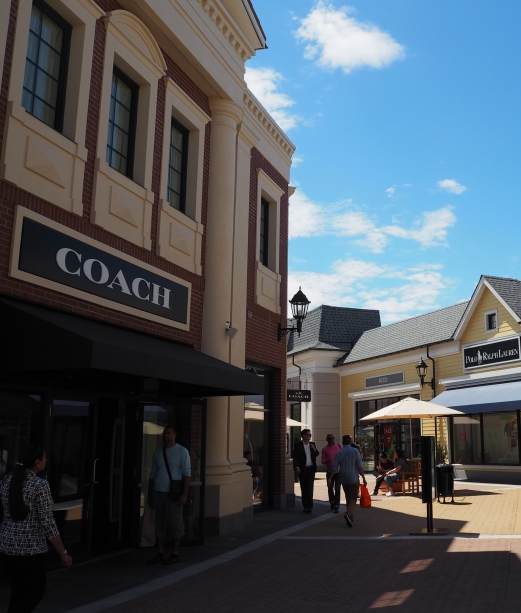 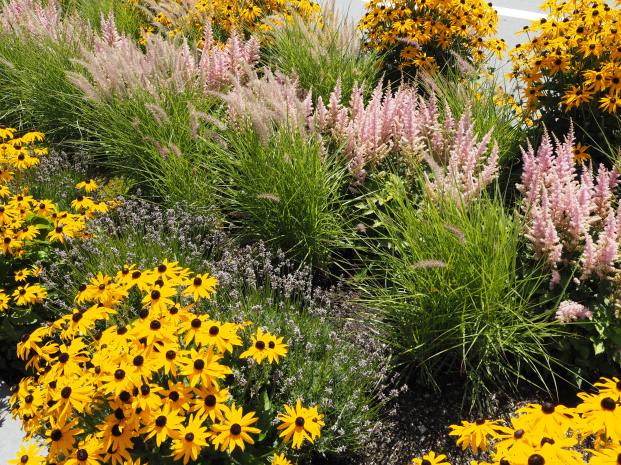 Even though Vancouver is huge and I have no car, getting around is super easy. Public transport is spot on and so frequent. It is reliable unlike public transport in England and reasonably priced. I had no idea why the buses are connected to wires above but Google has just answered my question. They are known as trolley buses that draw power from overhead wires, crazy. Vancouver also has sky trains and sea buses. I’ve used the sky train twice, it is like a monorail but also goes underground so that confuses me. I am yet to try to the sea bus so I will let you know how that goes.

This has turned into a mini tourist guide and I’m pleased. I can’t wait to show you where I’ve gone next and what I really wish to see.